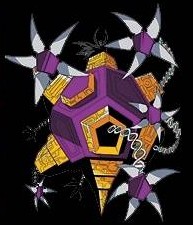 Season 1's ultimate enemy, Apocalymon (the Dark Masters' boss), is phenomenally powerful. He can use other evil Digimon's attacks as well as his own ultimate attack, Total Annihilation, which is a self-destruction attack. After destroying the Digidestined's crests and tags, he converted them to data and uploaded them into a parallel DigiWorld. Luckily, the kids realized that the power of their crests was inside them and digivolved their partners. As they defeated Apocalymon, he launched his Total Annihilation attack, threatening to destroy the entire Digital World, but the DD used the power of their Digivices to seal the attack into one area so it destroyed nothing but its perpetrator.