Devimon is an evil Digimon (well, duh; look at his name, and besides he's in the Enemies section) who uses the Black Gears to control Digimon, forcing them to do his bidding. With the help of his henchman Ogremon, and Leomon (who he controls using his Touch of Evil attack), he goes around generally tyrannizing the Digital World and trying to get rid of the Digidestined kids. He might have succeeded, except that Patamon finally managed to digivolve to Angemon. Angemon and Devimon were equal in power, but Angemon used all of his energy to defeat Devimon, getting reconfigured himself in the process. 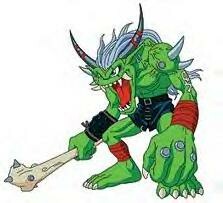