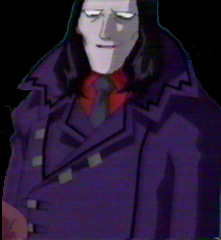 Oikawa, when he was a kid, had a Digimon partner, Datirimon. Later, he was Cody's dad's best friend, and he and Hiroki (Cody's dad) were planning a trip to the Digital World. Unfortunately, Hiroki died before they could go, and Oikawa never really got over his best friend's death. Thinking that it would let him go to the Digital World, he let VenomMyotismon take over him, but he just went evil. He created Arukenimon and Mummymon from his own DNA (that's why they have a human form). He used Dark Spores to infect a whole lot of kids and fed on their energy. When MaloMyotismon finally left his body, he was too weak to live, even with Cody's encouragement. He was still in the Digital World, though, so his wishes had power. With his final wish, he turned into pure good energy to protect the Digital World forever.