Impmon is a mischievous Digimon who ran away from his Tamers, Ai and Mako, because he didn't like them (they were nice enough, but they kept trying to pull him into two pieces). He sees the other Digimon having fun and being happy with their Tamers and he's jealous, so he does his best to discourage them from staying with humans. He acts tough and insists that he's the strongest Rookie and doesn't need a Tamer, but he secretly wishes he could Digivolve. 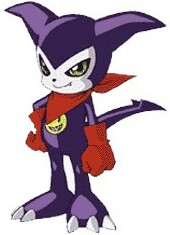 Beelzemon is the Digivolved form of Impmon. He is a strong Beelzemon who goes crazy trying to destroy the Digidestined and their Digimon. He deletes Leomon and absorbs his data, but when Jeri becomes really depressed (I'm not surprised, how would you feel if your best friend got eaten up by some kind of big monster thing?) he feels guilty and saves Jeri from the D-Reaper...