A long time ago, Beast Digimon and Human Digimon fought each other all the time, and no one could stop them. Lucemon, an angel Digimon (who looks like a little girl XD), brought peace to the Digital World, but soon he became the Fallen Angel and his rule became one of evil. The 10 Warriors banded together to defeat him and lock him away in the centre of the Digital World. He reached out from there to corrupt Cherubimon and gather enough data to restore himself. Cherubimon was defeated, but Lucemon had enough data to release the Royal Knights, Dynasmon and Crusadermon. They basically destroyed the Digital World and got him enough data to escape the "egg" he was inside.

Lucemon has four modes: Lucemon Larva (when he was curled up in the centre of the Digital World), Lucemon (pictured), Lucemon Falldown Mode and Lucemon Satan Mode. Each of the last three is defeated separately by the Digidestined. Susanoomon first appears as Takuya and Kouji join forces to defeat Lucemon FM, after Lucemon FM scans Kouichi's data. 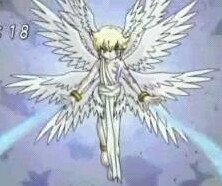